Organizing a cell’s genetic material from the sidelines

Baltimore, MD—A tremendous amount of genetic material must be packed into the nucleus of every cell—a tiny compartment. One of the biggest challenges in biology is to understand how certain regions of this highly packaged DNA can be called upon, so that the genes encoded in them can be “turned on,” or expressed and used to manufacture RNA and proteins.

New work published in Molecular Cell by a team of biologists from Carnegie, Soonchunhyang University, and Johns Hopkins University has shed light on this process and their findings have implications for certain age-related diseases and organ decay.

The nucleus, where a cell’s DNA is housed, is surrounded by two membrane layers. Some of the cell’s DNA is packed in the nuclear interior and some at its periphery. Filament-forming proteins called lamins form a meshwork that connects the DNA at the nuclear periphery to this nuclear membrane.

Lamins are evolutionarily conserved and they have several important roles, including maintaining the shape of the nucleus and influencing gene expression by sensing the cell’s needs—like a cellular butler. Mutations in lamins or changes in the amounts of lamin proteins present in a cell are linked to defects in animal development, including human diseases such as premature aging, certain neuropathies, heart defects, and age-associated organ decay.

Since lamins interact with the DNA found at the nuclear periphery, many scientists believed that if the lamin meshwork were removed, it would only affect the folding and packaging of the DNA that exists close to the nuclear membrane.

But this research team, led by Carnegie’s Yixian Zheng, showed that when cells are lacking in lamins, changes in how the DNA on the nuclear periphery is packaged alter the structural positions of DNA segments in the nuclear interior.

“It was initially thought that lamins would only influence expression of genes encoded by DNA packaged at the nuclear periphery, but reports, including our own, have shown that cells without lamins, or with lamin-related mutations, have alterations in their expression of genes found throughout the DNA in the nucleus,” Zheng explained.

Through in-depth analyses of DNA interactions occurring in the nuclei of cells that lack lamins, the team demonstrated that lamins maintain the relative positions of DNA segments throughout the nucleus. When the positions of genes are altered due to lamin-related mutations or lamin depletion, the genes are not “turned on” or “turned off” correctly. This explains why proteins from the nuclear sidelines can influence the expression of genes throughout the nucleus.

“Lamins are known to build organs during embryonic development and maintain organ and tissue functions later in life. One of the most-interesting aspects of our findings is that the broad influence we now know lamins have on DNA organization and gene expression can help explain how these crucial lamin functions are achieved,” Zheng added.

Going forward, the team wants to determine how lamins sense the needs of the cell to help call on gene expression, because such understanding is critical to understanding lamin-associated aging and diseases.

This work was supported by the National Research Foundation of Korea, the Soonchunhyang University Research Fund, National Institute of Health and the Ellison Medical Foundation. 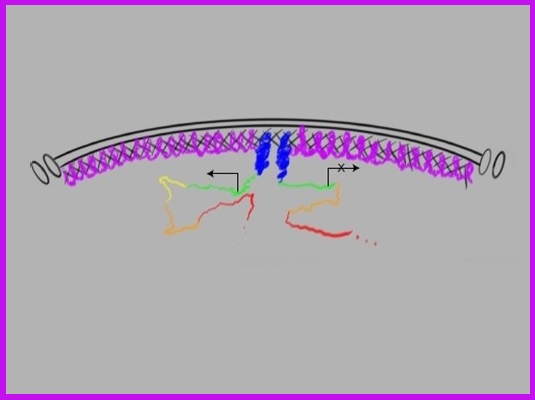