Intestines modify their cellular structure in response to diet

Baltimore, MD— Body organs such as the intestine and ovaries undergo structural changes in response to dietary nutrients that can have lasting impacts on metabolism, as well as cancer susceptibility, according to Carnegie’s Rebecca Obniski, Matthew Sieber, and Allan Spradling.

Their work, published by Developmental Cell, used fruit flies, which are currently the most-sensitive experimental system for such detecting diet-induced cellular changes that are likely to be similar in mammals.

There are three major types of cells in fruit fly (and mammalian) intestines: Stem cells, hormone-producing cells, and nutrient-handling cells. Think of the stem cells as blanks, which are eventually programmed to become either hormone-producing or nutrient-handling cells.  The authors discovered that this programming can be influenced by dietary nutrients, and that young animals are particularly sensitive to these changes.

Obniski, the lead author, and her colleagues found that changes in dietary cholesterol particularly alter the cellular programming driving the production of new specialized cells from stem cells.

Moreover, the researchers were able to identify the detailed molecular mechanism by which cholesterol causes these changes in cell fates, and to show that it is closely related to the way human intestinal cells regulate cholesterol production.

What does this mean?

It shows that low nutrient availability, especially early in life, such as the low-cholesterol diet for the fruit flies, triggers changes in intestinal structure and metabolism that have long-term effects.  These changes persist for quite a while even if the diet changes, which can increase the risk of metabolic health problems down the road.

“Children born to malnourished mothers often struggle with obesity later in life and our findings could explain the physiology of why that happens,” Obniski explained.

She and her colleagues say that further understanding the how nutrient availability affects intestinal function could help researchers find ways to use diet to mitigate aging and disease in adults.

For example, the biochemical signaling pathways that were shown to underpin this developmental metabolic programming, explain why a high-fat diet can promote the formation of certain types of intestinal cancer.

“The intestines are the organs most-directly responsible for balancing an organism’s long- and short-term needs with its nutritional environment,” Spradling said. “The power of the fruit fly as a model system allows one of the complex mechanisms that balance these needs with diet to be understood at a mechanistic level, something that is very difficult to do directly in mammalian systems or in human patients.”

Caption: The cellular structure of the intestine responds to specific nutrients in the diet.  Here, a fruit fly gut is shown—each blue circle is the nucleus of an intestinal cell—which has doubled its normal number of hormone-producing cells (pink dots) following a diet high in cholesterol. The paper by Obniski, Sieber, and Spradling, reports such changes in several tissues, shows they have long-lasting effects on metabolism and cancer susceptibility, and documents the likely underlying mechanism.

This research was funded by the Jane Coffin Childs Memorial Fund and HHMI. 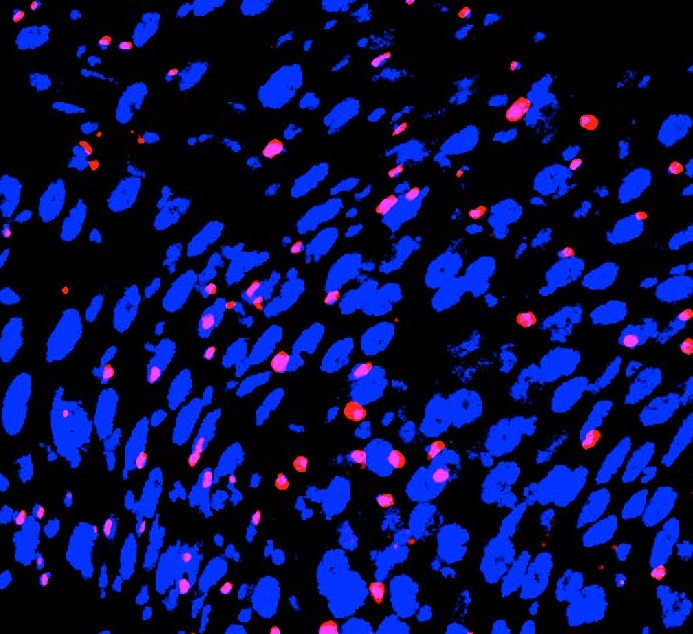