After “freezing” in fear, what part of the brain helps make fish swim again?

Baltimore, MD— The brain is the body’s mission control center, sending messages to the other organs about how to respond to various external and internal stimuli. Located in the forebrain, the habenular region is one such message-conducting system. Two new papers from Carnegie scientists explain how the habenulae develop and their unsuspected role in recovering from fear.

Found in all vertebrates, the bilaterally paired habenulae regulate the transmission of dopamine and serotonin, two important chemicals related to motor control, mood, and learning.

Previous research has shown that the habenular system is involved in modulating sleep cycles, anxiety, and pain and reward processing, among other things. It has also been associated with depression and addiction.

New work from Carnegie’s Erik Duboué and Marnie Halpern, assisted by Kiara Eldred, a Johns Hopkins graduate student, and Elim Hong, now a group leader in Neuroscience at the Institut de Biologie Paris-Seine, focused on the action of the habenular region in regulating fear responses in larval zebrafish.

It turns out that the habenulae differ between the left and right sides of the fish brain, both in their structure and when it comes to experiencing and recovering from fear. A mild electric shock makes zebrafish larvae “freeze” in fear, just like a deer in headlights. After this occurs, neurons in the left habenula are needed for a rapid return to swimming activity, according to the team’s findings, published by Current Biology.

“The link between the asymmetrical nature of brain function and responses to fear or anxiety may be a general feature of the vertebrate brain,” suggests Halpern. One provocative, but not universally agreed upon, hypothesis proposes that positive and negative stimuli are differentially processed by the left and right sides of the brain. Duboué intends to probe this idea further upon starting his own lab at Florida Atlantic University next month.

It’s clear from this research, and work from other groups, that the habenular region is a critical integrating center for relaying information between brain areas. But until recently, much remained unknown about how this region develops.

A study just published in Development from Halpern and Sara Roberson, a recent Ph.D. graduate, describes how a network of extracellular signals ensures that the habenular region successfully forms during zebrafish development. Remarkably, these early signals are also essential for setting up the molecular cues that later guide mature habenular neurons towards their correct targets.

“When signaling is disrupted early, the habenular pathway will not be properly wired up”, says Halpern, “and, ultimately, this has consequences on transmission of information throughout the brain.”

Caption: A. Labeled habenular neurons in the forebrain of larval zebrafish connected to their midbrain target. B. Dorsal view of the left-right asymmetric habenular region in a normal larva and in C. one lacking chemokine signaling, where many neurons are misrouted and project in the wrong direction. Images are courtesy of Courtney Akitake and Sara Roberson.

Both papers were supported by the National Institute of Child Health and Human Development. 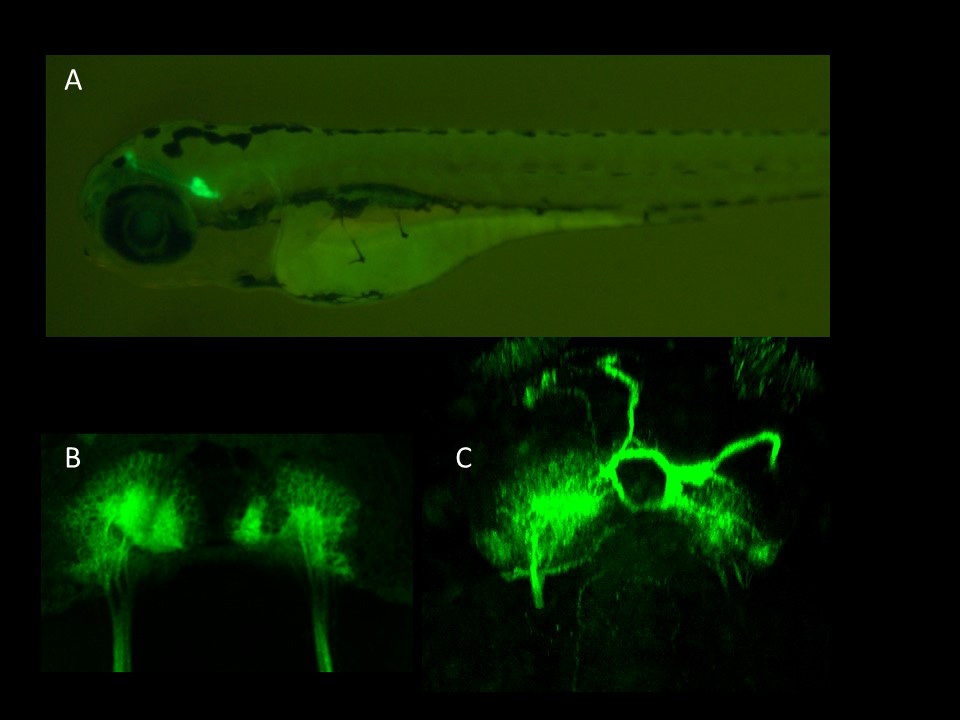